Peace and Stability in Asia – Conflict and Cooperation

“Legal Title to Territory in the Case of the Spratly Islands”

“Cyber Threats and Cyber-Security in Asia”

On 17 and 18 December 2015 CPG in cooperation with the Taiwan ASEAN Studies Center arranged an international conference on “Peace and Stability in Asia – of Conflict and Cooperation” at Amari Boulevard Hotel Bangkok.

The conference mainly dealt with two distinct yet interrelated themes of international politics related to peace and stability in Asia. The first was the struggle between the major competing geopolitical players – namely the USA and China – for dominance in Asia. The geopolitical strategies of these two global players were examined and discussed in the light of their impacts on the Asian security structure. Second, the conference looked at selected current spots of conflict and risk developments threatening peace and stability in Asia.

A total of 13 speakers from 10 countries contributed to the success of the conference, namely from Australia, China, Denmark, France, India, Singapore, Taiwan, Thailand, the United Kingdom and the USA. They presented on the general role of geopolitical strategies for international relations in Asia, facets the US-China relations and geopolitical strategies, the disputes in the South China Sea and the Taiwan-Strait, North Korea’s nuclear weapon program, arms-racing in Asia, and cyber-security.

The thread running through the papers and discussions of the conference was the conviction that the current geostrategic dynamics ultimately boil down to a large extent to the challenge of the uni-polar hegemonic position of the USA by China. Right from the beginning of the conference Prof. Dr. Hall Gardner, Chair of the Department of International and Comparative Politics at the American University of Paris, France, made this clear in his opening presentation on “Overcoming Geo-historical Rivalries in the Indo-Pacific: Toward the Implementation of Peace and Development Communities”. Subsequently, HE. Kasit Piromya, Member of the National Reform    Steering   Assembly    and    former Minister of Foreign Affairs of Thailand; Assoc. Prof. Dr. Jingdong Yuan, Department of Government and International Relations, The University of Sydney, Australia; and Prof. Dr. Klaus Larres, Krasno Distinguished Professor of History and International Affairs, University of North Carolina at Chapel Hill, USA, agreed in their respective papers on “Geopolitics and the Asian Security Order: Perception and Reality”, “A new Type of Great Power Relationship: China and the United States in a Changing Asia” and “Containment or Engagement: Is there a U.S. ‘Grand Strategy’ Toward China?” on a growing Chinese assertiveness in its foreign and security policies.

All geopolitical indicators hint to an aggravation of the confrontational US-China relationship in the long term although a major military clash is unlikely. The only conflict spot in Asia which indeed has the potential for a major armed conflict is North Korea, albeit that this danger is currently not imminent as demonstrated by Prof. Dr. Christoph Bluth, Professor of International Relations and Security at Faculty of Social Sciences, University of Bradford, United Kingdom, and advisor to various governments in the area of nuclear weapon policies and nuclear proliferation, in his paper on “Nuclear Weapons and International Security in Asia – The Case of the Korean Peninsula”.

The dynamics of the relationship between the US and China involve also other big players as the Indian perception of China’s ‘One Road, One Belt’-Initiative shows which was discussed by Major General Ashok Hukku (ret.). The former chief intelligence advisor to the Indian government presented on “One Belt, One Road & its Strategic Implications” highlighting China’s determination to ‘transform the existing world’s power structure into a bipolar one, of which one pole will be China’.

Another conflict area involving a great number of competing powers is the South China Sea dispute discussed by Assoc. Prof. Dr. Liselotte Odgaard, Institute for Strategy, Royal Danish Defence College, Denmark; Prof. Dr. Prasit Aekaputra, Faculty of Law, Huachiew Chalermprakiet University, Thailand; and Assist. Prof. Dr. Chi-Ting Tsai, Department  of Political  Science,  National  Taiwan University,  Taiwan  (ROC) in   their   respective   presentations on   “China’s   Strategy   of Deterrence  and  Legitimacy  in  the South China Sea Disputes”, “Legal Title to Territory in the Case of   the   Spratly   Islands”, and  “The  South  China  Sea  Peace Initiative    and    Taiwan’s Future  South  China  Sea  Policy”. Presenting from different perspectives of international relations and international law, all three scholars, however, agreed that the South China Sea is of vital strategic importance for the Chinese assertiveness as a leading global power reflected by Beijing’s intransigence with regards to its claims in the South China Sea. Prof. Dr. Richard Weixing Hu, Department of Politics and Public Administration, The University of Hong Kong, PR China, in his paper on “Taiwanese Party Politics and its Impacts on Prospects of Cross-Strait Relations” connected the regional security discourse to national politics highlighting the importance of the respective mutual influences.

Prof. Prof. Dr. Richard Weixing Hu (left), Prof. Dr. Chin-peng Chu, Dr. Chin-Peng Chu, Department of Public Administration, National Dong Hwa University, Hualien, Taiwan (ROC), and former Minister for of the Research, Development and Evaluation Commission, in his presentation on “Ma Ying-jeou and Xi Jinping’s Meet in Singapore: Implications for Future Cross Taiwan-Straits Relations” focused then on the actual status of the Chinese-Chinese relations. Coining it “cold peace” to characterize the foreseeable relationship between China and Taiwan (Hu) for the time after the predicted victory of Democratic Progressive Party presidential candidate Tsai Ying-Wen in the election in January 2016, they demonstrated that a too assertive interpretation of the ‘1992 consensus’ and the ‘One China’ principle therein by Tsai Ying-Wen, will be inacceptable for Beijing and will lead to a grave deterioration of the relationship between China and Taiwan.

The presentations were completed by two presentations pertaining to arms-racing and cybercrime. Dr. Tim Huxley, Executive Director, International Institute for Strategic Studies – Asia, Singapore, presented on the topic of “Military Modernisation, Arms-racing and Security in Asia” depicting an increasing military competition among Asian countries with the potential to increase the risk of an armed conflict in the light of the difficulty to establish instruments and measures of arms control in the foreseeable future. Finally, Prof. Dr. Roderic Broadhurst, Department of Sociology, College of Arts and Social Science, Australian National University, Australia, in his presentation on “Cyber Threats and Cyber-Security inAsia” drew the audience’s attention to net-security and cyber-crime in the Asian region and its instrumentalization for espionage between states illustrated in particular by the example of the US-China agreement on cooperation in the field of cyperspace.

The conference was well attended by participants coming from a variety of institutions including the Ministry of Foreign Affairs and Ministry of Defence of Thailand, international organizations, universities, and the diplomatic corps. Among the embassies represented at the conference were the, Belgian, Bhutanese, Bruneian, Canadian, Danish, German, French, Kenyan, Malaysian, Pakistani, Russian, Singaporean, Swiss, Vietnamese, as well as the Delegation of the European Union. 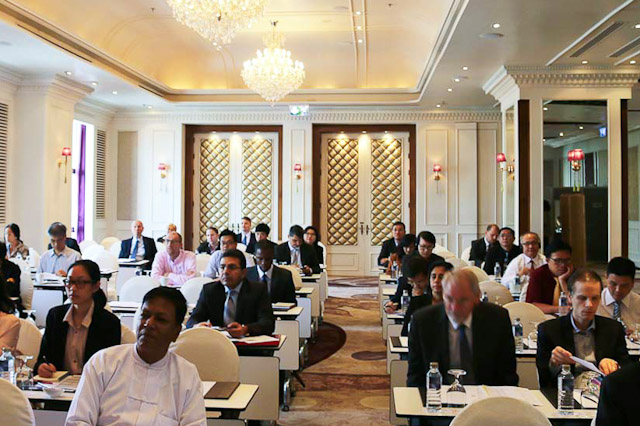