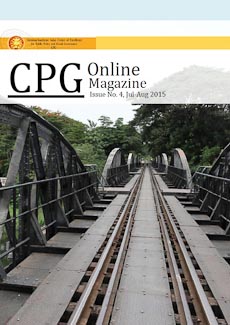 Right from the outset of its establishment at the end of 2009, CPG has been fruitfully cooperating with the German Embassy in Bangkok. During the term of office of Rolf Schulze, German Ambassador to Thailand since 2011, this cooperation has steadily deepened to the present, reflected in numerous events and activities for which CPG received support from the German Embassy. After four years of diplomatic mission in Thailand, Ambassador Schulze will leave Thailand in August to assume his new post as new German Ambassador to Chile. CPG would like to cordially thank him and the German Embassy for the nice and trustful cooperation between our institutions, the latest expression of which is the following interview conducted on the occasion of the farewell of Ambassador Schulze.

Q: Ambassador Schulze, before you assumed your post as German Ambassador to Thailand, where else have you been in which positions in your diplomatic career?

A career in the Foreign Service brings about a number of different postings with numerous topics and issues to deal with, based on the generalist approach and the principle of rotation. My career has led me to Spain but also to many Asian countries like Japan, China, and Vietnam, where I assumed my first ambassadorial posting and now I am currently serving as German Ambassador to Thailand. Before, during a term in Germany, I was entrusted in the Foreign Office in Berlin with preparing the Central Asia Concept that was adopted during the German EU- Presidency in 2007. Now I look forward to serving as Ambassador for Germany in Santiago de Chile in South America. My wife and I consider this an excellent opportunity to revive our Spanish language skills and to discover a continent which is new to us.

Q: What were key issues and policies towards Thailand during your time in office?

There were a number of events, political, economic or cultural that have left imprints on my memory of Thailand. Germany and Thailand could reaffirm their friendship and commitment to closer cooperation together during the celebrations of “150 years of German-Thai Relations” in 2012. A number of high ranking visitors and ministers travelled from Germany to Thailand and vice versa, among them our then Foreign Minister Guido Westerwelle who graced the 50 years celebrations of the German-Thai Chamber of Commerce with his presence and inaugurated the German- Thai cultural heritage project in Ayutthaya. Also the then Minister of the Economy, Philipp  Rösler,  and  the  Minister  of  Finance,  Wolfgang Schäuble, came to Thailand. A lasting effect had especially the visit of then  State  Minister  Cornelia  Pieper  who  proposed  a  German-Thai conference  on  Dual  Studies  of  Excellence.  This conference was  the starting point for a number of bilateral projects on dual education, that have now become a focal point of German-Thai cooperation. A highranking meeting between German Chancellor Angela Merkel and the Thai Prime Minister brought about a number of incentives for the deepening of bilateral relations.

The interest in cooperating closely on the burning regional and global issues of our days, such as climate change or sustainable development, is profound in both countries, Germany and Thailand alike. I am happy to say that during my term of office also the number of university cooperation programmes between Germany and Thailand multiplied – with 170 cooperation programmes, Thailand is prime partner for German universities in South East Asia.

I am convinced that Thailand will fare best if it returns as fast as possible to a democratically elected government – elections next year would be a positive sign. A democratic society will be the best basis for a sound economic development. According to the assessment of the Worldbank, Thailand is a higher middle-income country and we can only congratulate the country to this success. It has taken years of hard work and determination to accomplish this. Now, the challenge that lies ahead for Thailand is leaving the “middle income trap”, i.e. moving up the national production on the value-chain.

In my opinion there is one key aspect to achieve this – education. On the one side Thailand needs to set free its creative potential to generate new solutions and products. On the other side it is about enhancing productivity and developing skilled workers needed for  it. Here, excellent graduates from university are not enough. Highly skilled labor with a clear orientation to practical knowledge and a strong understanding of what is very concretely needed in the respective company is needed.

In Germany we have developed over a very long time a system called Dual Education – besides theoretical knowledge taught at colleges it comprises a hands-on training in the industry. In order to ensure that the knowledge is developed with the needs of the companies in view, a substantial effort is needed, and a sophisticated adaption – every curriculum is adjusted to the specific needs of the respective company.

Q: Regarding these issues and policies, can you name some major engagements and achievements of the German Embassy?

Let me introduce just one key project out of a large number of various engagements the Embassy is active in. I am very happy that together with our Thai partners and friends we could develop a dual studies’ programme which is tailor-made for Thailand. The programme is called GTDEE – German Thai Dual Excellence Education, and it is coordinated by the Thai-German Chamber of Commerce. We started three years ago with a few companies like BMW, Bosch and B. Grimm – they know the system and advantages of dual education well. The first students will graduate this year, not only with a Thai examination, but also with a certification according to German standards. The word is spreading and this year, we run the programme with close to 300 Thai students, working with major Thai companies like Singha and Mitrphol.

I am convinced that with the system of Dual Education Thai companies, students and parents can discover the great benefits this system can bring, not only for the professional development of the students themselves, but also for the workforce and economic development of Thailand as a whole.

Q: How do you assess the current situation and the prospects of German-Thai relationships for the near future?

Thailand has got what it takes to be successful. Therefore I see a bright future for the country. The investment in infrastructure and education will bring the country and its population to a new step of economic success. So far more than 600 German companies have contributed to shaping Thailand’s development and created tens of thousands of employments for Thai people and shared their know-how. I am confident AEC 2015 will bring about new impetus and dynamic to the region.

One key to success is the willingness of Thai people to embrace new technology and digital engineering in many fields, such as education, car manufacturing but also medical science to name but a few examples. There is also a great energy potential to be tapped on when the programmes   for   sustainable   urban   development   are   strengthened.

Sustainable building with insulated double glazing windows for example could help reduce energy consumption in cities considerably. The growth of the middle class will have another positive effect on economic, social and cultural development.

Of course there are also some key issues to be addressed to make success sustainable. One key aspect for investment is a stable legal and political environment based on democratic values. Thailand has always been at the forefront of democratic development in the region which has laid the sound foundation of economic activities. An open welcoming society attracts foreign expertise and investment and is leading to releasing the creative potential in science, design and industry that helps prop up society to a higher income level. I am convinced that the economic dynamism will resume substantially once Thailand has consolidated its course to an elected government and the return of democracy.

Thank you very much, Ambassador Schulze!