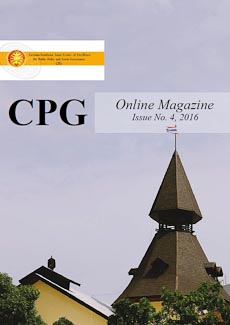 The Future Cross-Strait Relations: Challenges and Opportunities of the DPP Government

Hualien, Taiwan; Minister of the Research, Development and Evaluation Commission of the Executive Yuan; President of Friends of Europe Taiwan

As the first female President of the Republic of China in Taiwan, Tsai Ing-wen’s inaugural address on May 20, 2016  demonstrates  resolve  in  spearheading important reform  agendas  pertaining  to  building a better  country for  the younger generation; the pension system; the rigid education system; limited energy and resources; the distrust of the people to the judicial system; widening wealth disparities. Tsai emphasized that the new administration will help young people overcome national difficulties to achieve generational justice. Tsai’s addressed the following orientations as her political priorities:

ΙΙ. Reactions from the Public in Taiwan and Beijing’s

Since Tsai’s victory in the presidential election in January 2016, she has been facing two important challenges: the first is how to balance and fulfill the demands and requirements of the Taiwanese electorate. The second is how to explain and define her “status quo” of the Cross-Strait Relations. For the first question, Tsai has demonstrated some significant issues as mentioned above and she promised that the new administration will initiate actions. Second, Tsai used some points to come as close as possible to the bottom line of the nature of Cross-Strait Relations, the so-called 1992 Consensus. In this regard, she defends the Republic of China as owner of the whole Chinese territorial sovereignty under the framework of the ROC Constitution which means Taiwan’s (ROC) China, not Beijing’s (PRC), and she emphasizes that she respects the 1992 dialogue as a historical fact.

For China,  there  is  no  possibility  for  further dialogue and cooperation or negotiation between Taiwan and mainland without two conditions being fulfilled: Taiwan explicitly acknowledges the 1992 Consensus on the one hand and Taiwan recognize its One-China Principle without ambiguity on the other hand. Even Tsai said that she will make good on her words with regard to consistent, sustainable and predictable Cross-Strait Relations. That means, Tsai’s speech might not be enough to rectify her pro- independence attitude and she never explains how to define her status quo and what is the real meaning of China as an “incomplete answer sheet.”

Tsai made no commitment to the controversial One-China Principle and 1992 Consensus. The Beijing-controlled Global Times Newspaper took this opportunity to warn that Cross-Strait Relations will enter an “era of uncertainty”. On the contrary, Taiwan’s public opinion survey published in June 2016 by the Mainland Affairs Council on Tsai’s inaugural speech demonstrated that 74.7% of Taiwanese agree that cross-strait affairs should be managed on the basis of the ROC Constitution and the Act Governing Relations between the People of the Taiwan Area and the Mainland China Area. Also 85% think both side should maintain the current mechanism for mutual communication and dialogue. According to a Television Broadcasts Satellite (TVBS) public opinion survey, conducted one month after Tsai’s new administration took office, about 49% agree that Tsai’s policy orientation is on the right way, including Cross-Strait Relations and regional development and cooperation,. In a word, most of the people give a thumb-up to Tsai’s first month in office.

In recent weeks, Taiwan and mainland China haven’t had any formal and official dialogue, no ring of the fax machine and no hotline between ministerial levels. All the mechanisms of the communication platform which have been established under former President Ma Ying-jeou have been stopped by the mainland side. Beijing clearly declared that if there is no acknowledgement of the 1992 Consensus, there won’t be any negotiations with Taiwan. More and more issues and incidents have increased the pressure by mainland China, e.g., in March, China built formal diplomatic ties with Gambia, ending the “diplomatic truce”. In April, Taiwan’s delegation to the OECD’s steel committee was given the boot after China complained against Taiwan’s participation Moreover, Kenya, Malaysia and Cambodia have been pressured to deport Taiwanese suspects to China, a move that was criticized by the DPP and many in Taiwan as an assertion of sovereignty. However, Beijing saw it as a matter of due course. Mainland China’s officials, academics, and universities have warned against reducing the scope or intensity of the exchange. At the World Trade Organization’s annual meeting in Geneva, China demanded Taiwan’s participation to happen only under the One-China Principle and with “Chinese Taipei” as a political designation. Furthermore, mainland China canceled a scheduled performance of the Puzangalan Children Choir from the Paiwan tribe in southern Taiwan in Guangzhou as they had sung the ROC anthem at Tsai Ing-wen’s inauguration. Beijing also plans to cut Taiwan-bound tourists in three stages by the end of 2016, estimated to fall under 2 million in 2016, sharply down from 3.85 million arrivals from the mainland recorded in 2015. Additionally, Taiwan may lose NT$ 3.4 billion every year if Beijing bars mainland students from coming to Taiwan. The head of mainland China’s ARATS, Chen Deming, stated that the observation of Taiwan’s new government is focus on its actions rather than on its words. Even though Chen emphasized that relations between the mainland and Taiwan’s new government should not affect Taiwanese enterprises doing business in China, commercial cooperation and people-to-people interaction, he still stated that the resolution of the “Taiwan question” is entering a new calculus in which mainland China’s power is increasing, combined with a reduction of U.S. intervention. Moreover, after the accident of a Taiwan navy missile misfire on 1 July 2016, Zhang Zhijun, Head of the State Council’s Taiwan Affairs Office (TAO), called for a “responsible explanation” of the matter. He stated again the importance of “safeguarding the peaceful development of Cross-Strait Relations based on the political foundation of the 1992 Consensus.” All in all, it has been shown that China’s strategy is not to make Taiwan more isolated from China.

Besides the above mentioned possible impacts for Taiwan, other consequences will occur in various fields of policy if there is no political basis in form of the 1992 Consensus..Even Taiwan investors are confident that President Tsai can clear obstacles to cross-strait controversial issues and hope that the new DPP government will push for the ratification of a trade-in-services agreement that was signed in 2013. They urged the DPP to complete the negotiations on a trade-in-goods agreement. For investors, without those two agreements, other negotiations between both sides will be meaningless. Besides, cross-strait fishing and agricultural cooperation and exchange in the farming sector have also grown rapidly over the years. Taiwan’s agricultural investment in mainland China has reached US$ 3.45 billion and Taiwan’s fishing business employs up to 30,000 Chinese sailors. Any adjustments of the policy will cause negative impacts. The rosy prospects are now doubted by individual farmers and associations in the farming sector.

Chinese scholars have mixed views on cross- strait connections following Tsai’s inaugural speech. The majority opinion agrees that bilateral relations face a bumpy ride in the near future, because they said that Tsai did not provide a clear stance on the 1992 Consensus. Even though Tsai adjusted her comments on that consensus, they were still dissatisfactory in their eyes. Huang Jiashu, Profssor at Renmin  University,  commented  that  Taiwan’s mainstream public opinion to maintain the status- quo of “no unification, no independence, no use of force” has become “anti-unification and tolerance of independence” or “resistance to unification and de facto independence”. Many estimate that if the two sides continue grappling with each other, Taiwan will gradually lose its bargaining chips vis-a-vis China and, according to comments of Zhu Weidong and Li Yihu, Cross-Strait Relations will enter a vicious cycle. In response to those arguments, the Taipei Times, a favorite of the pan-green media in Taiwan, commented on June 14, 2016 that these were Beijing’s “bully tactics to control Taiwan.”

From a historical perspective, there was an understanding only in 1992 under the former President Lee Teng-huei’s Kuomingtang (KMT) government that both sides referred to under the heading that “there is only one China but different interpretations.” This formed the consensus for further negotiations. The DPP rejected the existence of the consensus and Tsai Ing-wen is striving for “a formula that will not shatter the current stability” in Cross-Strait Relations. Tsai’s speech might not be enough to respond to China’s expectation, but she has shown her good will. Beijing should consider to reciprocate the good will to restart a channel with the DPP government, and to give an opportunity to measure each other’s intentions and see whether the DPP can deliver on Tsai’s promises as she expressed her position on Cross-Strait Relations  based  on the R.O.C. Constitution and the Act Governing Relations between the People of the Taiwan Area and the Mainland Area that clearly spell out the One-China Principle. The real core of the question might be that Tsai is not clear enough on the 1992 Consensus and the One-China Principle. Only two weeks after Tsai presented her new position, she created a mechanism with Japan to settle maritime disputes to resolve differences over fishing rights in the waters near the Japanese reef of Okinotori, which I object of territorial disputes between China and Japan. She also referred to herself as the Taiwan President, not President of the ROC, when she made her first state visit to Panama. Tsai is already breaking with the foreign policy of her pro-Beijing predecessor. That means, Beijing might keep lower level of its confidence on her administration.

Thus, Tsai’s government should build trust relations with China firstly and avoid pursuing independence in the international arena in order not to touch the red-line of mainland China. Secondly, if independence is pursued, it is impossible to keep peace and stability in the Taiwan straits. Thirdly, Tsai’s administration needs to keep a beneficial balance between national security and economic development. Fourth, Taiwan should consider seeking multilateral strategic cooperation with neighboring countries in Asia and the international community under the One-China perception framework as an important political goal. In the near future, the One-China policy is absolutely non- negotiable for China. Tsai’s government will face a lot of challenges and she has a big chance to change history to find a new way to address the problems during the period of power transition.