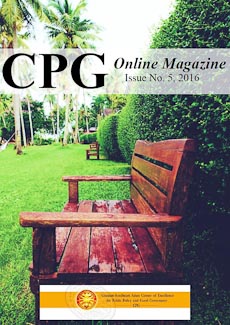 On 13 June 2016 H.E. Ahmad Rusdi took up the post of the Indonesian Ambassador to the Kingdom of Thailand. The interview below Ambassador Rusdi informs about his personal background and shares his views on of some current issues and developments in international and Indonesian politics.

First of all, thank you very much, Ambassador Rusdi, for your time. You have been here in Bangkok for three months now. What are your first impressions?

Generally, I can say that I am very happy to be here in Thailand. This is my last tenure as a diplomat after serving in the Foreign Service for 34 years, 20 years of it I served as a Protocol Officer. Now that I have been posted in Bangkok, I am happy that can learn more from Thailand. Thailand and Indonesia have close relations. The relationship is progressing since the establishment of formal diplomatic relations in 1950. Indonesia has a lot to learn from Thailand, especially how the government is guided by the King is very interesting for me. That includes the attention by the government to social und public topics. It is very interesting to monitor how the government manages agriculture, industry, tourism and even the international business sector. The Thai-people, including Thai-business people – the entire Thai-community profits from these efforts. Particularly interesting for us is to see how “halal food” is regulated and managed here in Thailand. Another first impression is the well developed infrastructure in Bangkok. Especially the connection to the airport is good. You can reach the airport also via train. In the city you have the possibility to take the subway. In Indonesia, we are in the process to expand our public transportation. Mainly that concerns the way to the airports. It is very important for the public as well as for business people.

Please let us know a little bit about your personal background.

I come from Pekalongan, a city of Batik in Central Java where my family has a batik business in the third generation. In 1986 I left Jakarta and came to Prague with my wife and my daughter. There, our family became bigger. When we left Prague we came back to Indonesia in a group of five. In the meantime, in former Czechoslovakia, my two children were born. I have five brothers and two sisters. I am the second one among the siblings and the oldest brother. As the oldest brother I have to act as a model for the younger ones. We learn from each other. They rejoice with me about my success in the Foreign Service.

When I think about my parents and about how they taught us children to be successful, what stands out is that they were not thinking about the money, but thinking about holding a good friendship or making a client satisfied. Not to forget that my parents had to lead the business every day and they had to take responsibility for almost 300 employees as well as meeting the economic targets. I learned from my parents how to serve but I wanted my work to be more efficient and not only for the business. It is my younger brother who continues the family´s tradition of Batik now.

After I graduated from the University in Bandung in “International Relations” at the Faculty of Social and Politics, I joined the foreign service. My first posting was in Europe, my second in Asia, my third in the United Kingdom and in Greece. I have been working for the Foreign Service for almost 34 years now. As an ambassador you must be prepared 24 hours a day and seven days a week. My success is based on the studies I did, but far more significantly on the knowledge and experiences my parents provided me with. I am thankful for that. Until now I profit from these experiences they gave me. Next year I will retire as a Civil Servant. For the moment and close to my retirement, I am happy to stay among friends. It is a good time for me to be in Bangkok at a big embassy. Indonesia and Thailand have a long history of good bilateral relations. Now I have the possibility to make a contribution to the existing friendship between Indonesia and Thailand.

What are personal goals for your term here in Thailand?

I want to further the existing bilateral relations between Indonesia and Thailand. That concerns every level: the government and other stakeholders including people to people contact. I hope to bring Indonesia and the Thai people closer. I also wish to intensify our relation not only in topics of politics and economy, but also when it comes to culture. Just to give an example: When I arrived here, I informed the Minister of Education, that Indonesia organizes the national Jamboree. More than 20000 Indonesian scouts will join this event. So I think about how the Thailand Boy Scouts, our friends, can participate in this event. So I invited them to join the event. Thailand sent 60 scouts to participate in the Jamboree. We want to intensify our relations to our neighbours. Through the brotherhood among the scouts and with our neighbours, we want to promote the exchange and leadership programs. It is a contribution to the next generation.

After these personal questions, I would like to ask for your views on some issues and developments in international politics and domestic affairs in Indonesia. Let us begin with the ASEAN. Together with Thailand, Indonesia has been playing a leading role in the development of the organization. How do you see the further role of Indonesia? What kind of role can Indonesia play in this organization?

Thailand and Indonesia, the founding fathers of ASEAN, Indonesia has been taking and always will continue to take a strong role in the organization. You surely know that the ASEAN will celebrate the 50th anniversary next year. For almost 5 decades Indonesia has been loyal and committed to the ASEAN in all sectors: in the cultural, social, economic and political sector. We continue to play the leading role. We feel committed, because ASEAN is growing and gets a bigger role as a dialogue partner to other parties: ASEAN and the US, ASEAN and Russia, ASEAN and Europe, ASEAN+3, ASEAN and Australia. And now we officially established the ASEAN economic community.

In this regard, what do you think about the application of Timor-Leste to join the ASEAN?

Indonesia welcomes Timor Leste‘s application for ASEAN membership. Since 2011 ASEAN has a working group to review the application. It is for the whole ASEAN to discuss and think about it. But this case is in progress and our understanding of this topic must fit the roadmap.

The Asian region is becoming a very important strategic area for the USA and China. How do you see this issue, the competition for influence in this region between the US and China?

As we know, the world’s geopolitical and economic interest is shifting towards Southeast Asia. A great power game is returning to the region. China has developed into a powerful nation and the US still is one. Political strategy must be observed carefully and that includes the South China Sea.

On the South China Sea – Where do you see ASEAN factor in at the current crisis? ASEAN has been rather quiet on the recent PCA ruling.

We have to think about what kind of role ASEAN should take in this conflict. We need to figure that out through dialogue and cooperation, for example within the context of ASEAN+3. In the near future, ASEAN needs to push forward an early conclusion of the Code of Conduct in the South China Sea.

I think a solution can only be found via dialogue and not by showing one’s own power. There are many possibilities to find solutions and the means must not be limited to bilateral dialogues regarding the possibilities of the ASEAN.

The final question concerns the religious, better the religious-political development in Indonesia. How do you assess the threat of the Islamic State in Indonesia? I remember the bombing in February, this was an IS-attack.

One of the characteristics of terrorism is that it can happen wherever and whenever in the world. The self-appointed Islamic State is perhaps the most non-Islamic terrorist group with an exclusive ideology. In Indonesia, we the government as well as the public, including the Islamic groups, have revealed our rejection of ISIS. The ideology contradicts our values of a united, tolerant and pluralist community. In Indonesia, the religious groups live in respect and tolerance together. So we have strictly banned ISIS in Indonesia, we even prohibited Indonesians to join ISIS activities. Our government and our people are committed to it. For the long-term as well, the military alone will not suffice to deal with the ISIS threat. We will use political force against radicalism. The government is very serious about solving this problem. ISIS concerns everyone, we talk about a global problem.

The interview was conducted by Dr. Duc Quang Ly, Project Manager at CPG