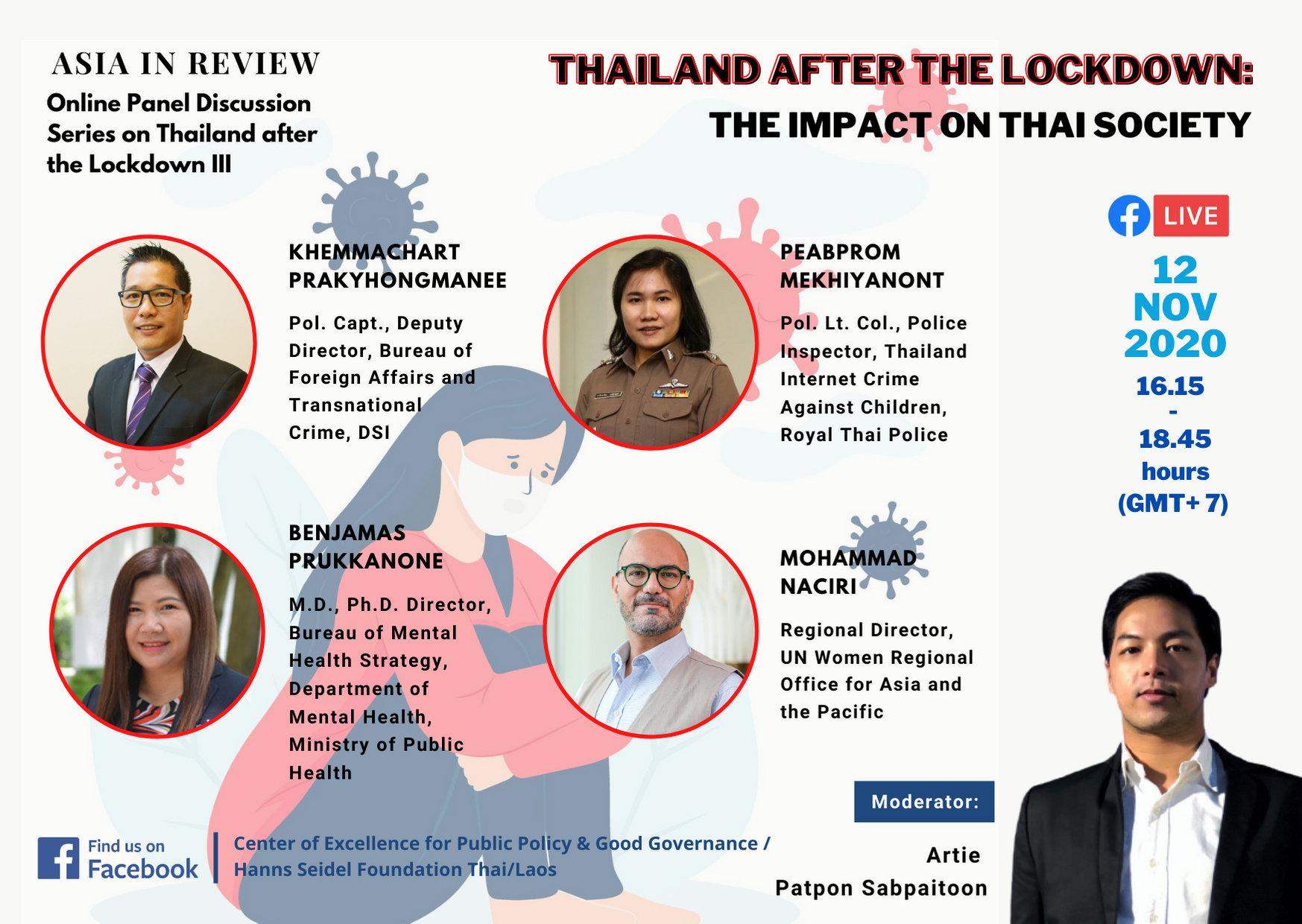 Thailand after the Lockdown III

Thailand after the Lockdown: The Impact on Thai Society

jointly hosted by the

** The event will be broadcast live on the CPG and Hanns Seidel Foundation’s Facebook pages.

The corona crisis abruptly changed the daily lives of millions of people living in Thailand. Several lockdown measures were initiated to curb the spread of the virus. In addition, the country was sealed off from international travel which especially contributed to the rapidly worsening economic situation. Though most measures of disease control, except for the continued ban on international travelers, have by now been lifted, the impact of the crisis on the Thai society persist.

After CPG’s events about the pandemic’s influence on Thai politics and the economic outlook for the country earlier this year, this online discussion looks at the social aspects that have been thrown into relief. Pertinent issues are discussed from psychological and society perspectives, also considering preexisting trends that were exacerbated.

One of the most striking issues reported over recent months has been the rise of the number of suicides. According to figures presented by Thailand’s Department of Mental Health in September, the suicide rate has increased by 22% in Thailand in the first six months of this year, compared to the same period last year. Most of the suicides were related to personal problems, depression, economic pressure and alcohol.

After the financial crisis of 1997, suicide rates also jumped by between 20% and 30%. The current figures thus allow the inference that the Covid-19 crisis has been a contributing factor for the increase. Indeed, domestic and international studies found a correlation between stress experienced during the lockdown and suicidal tendencies. Subsequent economic pressure has further increased the stress levels in many cases. Our event therefore aims to discuss the psychological distress experienced by people in Thailand as well as cultural and religious attitudes toward suicide that may need to be mentioned in this regard.

In addition, cases of domestic violence and sexual abuse have been on the rise during the lockdown and afterwards. According to figures of the Women and Men Progressive Movement Foundation, cases of domestic violence against women rose by 50% during the first six months of the year, compared to the same period in 2016. In several cases, economic pressure due to the closure of businesses exacerbated the situation at home. Crisis centers in hospitals across the country have been more frequented than usual. Hotlines to public authorities were overwhelmed with calls, making it often difficult for victims to seek help.

Against this background, the event also discusses societal attitudes, which may often consider domestic violence as a family or private matter, rendering it a particular challenge to address such incidents publicly. In addition, male dominance in many public authorities and throughout the Thai society in general may also be discussed as a possible contributing factor to the challenges that women encounter when looking for help.

Further points may adopt a broader perspective on the crisis’ impact on the nation’s psyche: How did the people in Thailand generally cope with the sudden and substantial change of their lives? While the country has been internationally praised for its high level of social discipline and compliance with anti-corona measures, what have been other physical and mental sacrifices along the way? Which role did and could Buddhism play in this regard?

Deputy Director of Bureau of Foreign Affairs and Transnational Crime at the Department of Special Investigation (DSI); an expert in the investigation of transnational crimes including crimes against children; a member of the committee of legislation amendment in response to the Convention on the Rights of the Child