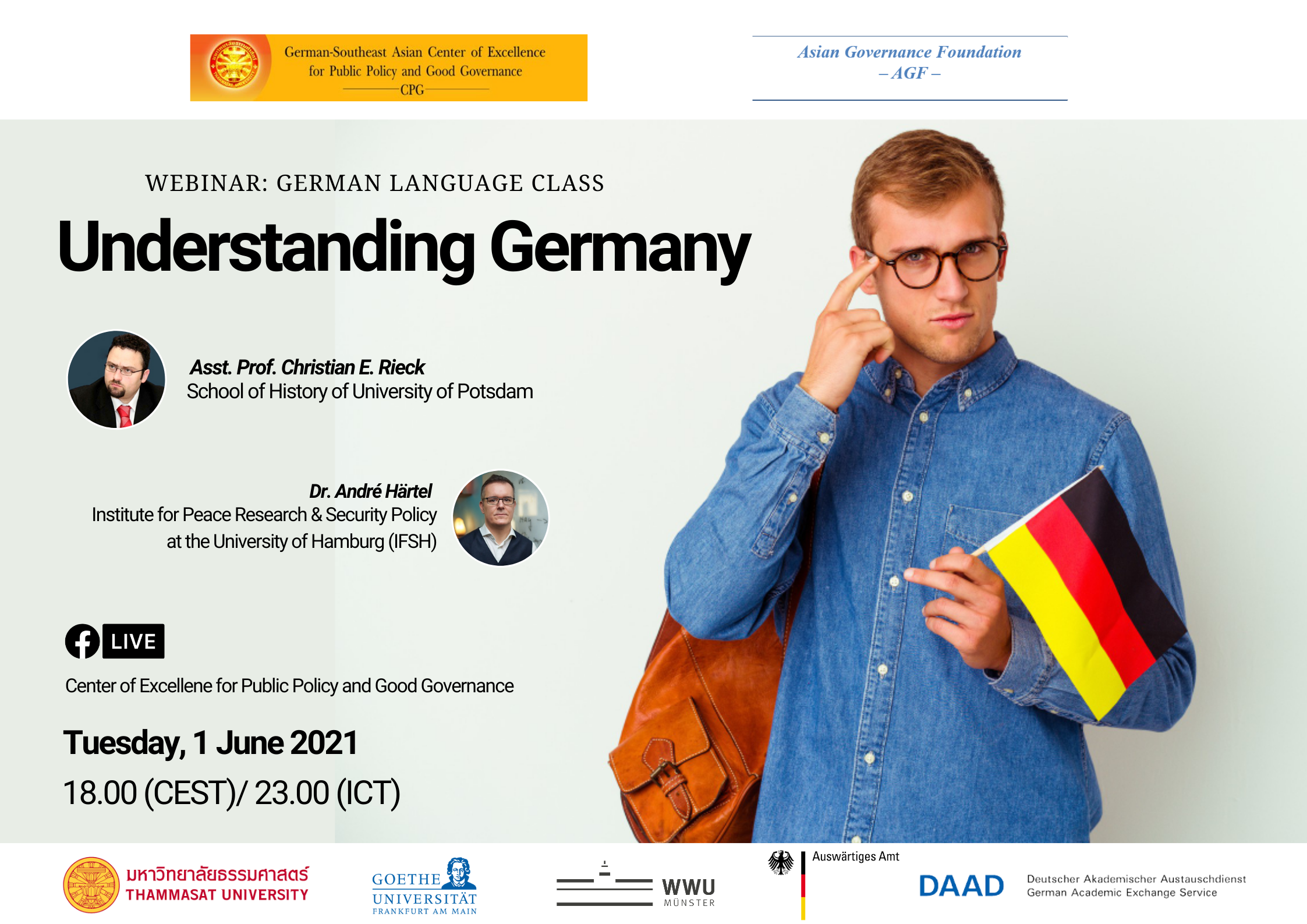 In its capacity as cultural mediator between Germany and Asia, the German-Southeast Asian Center of Excellence for Public Policy and Good Governance (CPG) at the Faculty of Law of Thammasat University has been organizing offline German Language Classes for predominantly Thai students for more than ten years. In response to the pandemic-caused restrictions on mobility and gatherings, CPG since the beginning of this year has begun to offer in parallel an online German language program open to participants from all over the world.

As complimentary part of these language classes, CPG is offering a regular series of three webinars on the topics “Studying in Germany”, “Dos and Don’ts in Germany”, and “Understanding Germany”.

The third webinar, to be held on 1 June 2021, will provide information and advice pertaining to “Understanding Germany”. This webinar aims to dig into the history of Germany and try to deduct explanations for today’s social phenomena. In a relaxed atmosphere, two distinguished academics will have a discussion and shed light on the “sensitivities” of the Germans, that have developed due to societal, historical and political experiences and have formed their take on Law and Order, the Social State, the meaning of Christianity, and their view of the world, inter alia. This will be followed by a Q&A session.

The duration of the webinar will be around 2 hours. Participation in these webinars is optional.

Christian E. Rieck is an Assistant Professor at the School of History of University of Potsdam, as well as a lecturer at Humboldt University in Berlin and Universidad Rey Juan Carlos in Madrid. He studied law and economics in Bayreuth, Seville and Berlin, and holds a postgraduate degree in Latin American Studies from Oxford University. After working for the United Nations in Mexico City, the German Institute for Global and Area Studies in Hamburg and the Konrad Adenauer Foundation in Berlin, he now teaches at the intersection of history, political science and international relations.

Dr. André Härtel is currently a Guest Researcher at the Institute for Peace Research and Security Policy at the University of Hamburg (IFSH). He also acted as DAAD Associate Professor for „German and European Studies“ at the National University of Kyiv-Mohyla Academy (NaUKMA) in Ukraine, as Political Advisor at the Council of Europe’s Directorate of Policy Planning in Strasbourg, and as Lecturer in International Relations at Friedrich-Schiller-University Jena, Germany. His academic training in Political Science and International Relations he received at Friedrich-Schiller-University Jena, the University of Virginia, and Oxford Brookes University. Aside from his specializations in foreign policy analysis, international organizations, democratization, and state-building he is also an expert for the domestic and foreign policies of the Post-Soviet Space.